Fru Ndi Given 48hrs To Apologise For Unauthorized Visit To Livanda

The chief of Livanda village in Limbe, South West Region of Cameroon has given the National Chairman of the Social Democratic Front Party,Ni John Fru Ndi forty eight hours to apologise for what he says is Fru Ndi,s unauthorised visit to his village .
In a letter (picture below)addressed to Ni John Fru Ndi dated August 12,2019,the traditional ruler indicates that,it is the tradition of the people for visitors not to visit crime scenes unauthorized:“Livanda is a village headed by a traditional ruler and it is our custom and tradition that, strangers do not visit crime scenes unauthorised. I felt so disappointed when I got news of your visit to the scene of the recent food poisoning incident ”.
The chief further states in the letter addressed to Ni John Fru Ndi that: “ You being a man who respects culture and  tradition,you should understand what it means to break other people's culture and tradition. I therefore wish to inform you that, the village demands an apology from you within forty eight hours ”.“ I will not want unauthorised  visits to my village again for any reason ”. He added.
Sources indicated to DrayInfo that, the letter from the chief of  Livanda village came after Fru Ndi paid a visit to the family of those who were affected by the food poisoning incident that killed three persons of the same family in Limbe while eight others were rushed to the hospital for medical attention.
Fru Ndi is yet to make an official statement in this.
Just of recent,Ni John Fru Ndi traveled to limbe and was given a symbolic key by the Paramount ruler of limbe. This gesture of his sparked a lot of controversies between the paramount ruler and some other chiefs who demanded the symbolic key be returned to Limbe. DrayInfos has not had any information as to whether the symbolic key has been returned or not.
The limbe visit also saw Fru Ndi refused access to SONARA by officials  after the company suffered an inferno . 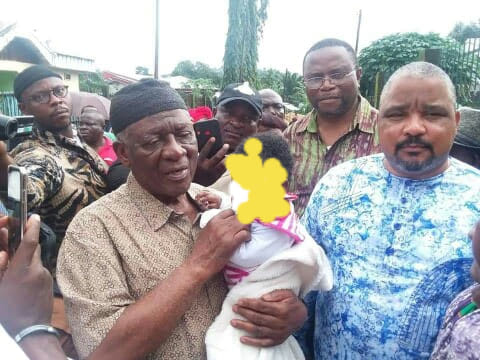 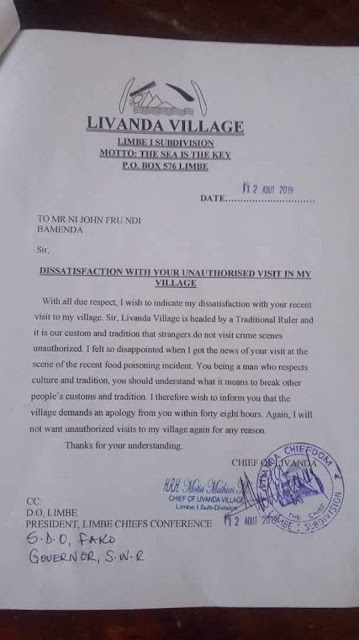