Many in  Bamenda and other parts of the NWR of Cameroon have been crowding travel agencies in a bid to travel out of the Region for fear of what the days ahead my turn out to be. Some travel agencies now charged 7000 FRS to Yaounde while some are collecting 8000FRS to Douala and 5000FRS to Bafoussam. This has been going on for days now,yet the North West Administration is yet to make an official statement on the mass exodus of the same people they are supposed to look after and make sure their needs are taken care off.
Talking to DrayInfos at one of Bamenda’s most renowned travel agencies, Saturday August 24, 2019, this lady who opted for anonymity says: “My last experiences when a lock down like this was announced, i almost lost my life. Our Ntahtru quarter was invaded by people in military uniforms and many were removed from their homes, there were gun shots everywhere. A bullet from one of the guns passed through my window and shattered my flat screen TV set. I am travelling to Mbalmayo, I will only return after the lock down since those who are supposed to protect us seem to be failing”.
Antoinette is a student; she says she is leaving Bamenda because of the lock down and to continue with her education: “My education and my future are so dear to me. Rather than stay in Bamenda and perhaps die from a stray bullet, I am going to Douala earlier than I had planned because the warring parties have proven to me that, none of them is capable of protecting us the civilian population.”
DrayInfos also caught up with a family head who was leaving with his entire family. He was at a travel agency at the Sonac Street neighborhood in Bamenda. Hear him: “How can I be here when those who claimed to have come to liberate us are the same people punishing us? Just last Tuesday, they came to my Ntarikon residence where my wife operates a small provision store accusing my wife of violating calls for ghost town. At the end of the day, I was forced to buy my head with 47000FRS. They have asked us to leave by imposing a lock down on us without taking into consideration the pains we have been going through. My destination is Yaounde since I am neither free in the hands of the Cameroon military of the Amba boys”?
As at Sunday August 25,2019,transport agencies in Bamenda were still flooded with passengers with some who have spent the night there with their children with some as young as 2-years-old.Many have not even been able to book tickets for themselves and their families.
This other lady we met at one of the travel agencies in Bamenda says:“ I left Ndop hoping to travel with my children to Nkongsamba, i was asked to pay 46000FRS for me self and my four children. The money i had on me was not enough, thank God my sister in Nkongsamba sent me some money to add to the one i had.I have the money now but there is no way to pay for the tickets

,a lady told me the agency has refused to collect monies from those not going directed to Douala.I don't just know what to do”.She burst into tears as her last child of about 3-years of age could be seen trying to stop her tears from flowing down her cheek.
It should be noted that, Bamenda has been witnessing a tensed atmosphere ever since the Ambazonia separatist leaders were slammed a life jail sentence. Life in Bamenda has been characterized by sporadic gun shots, clashes between the Cameroon military and suspected pro independence fighters have also been reported in many parts of the NWR, with undisclosed number of casualties recorded. 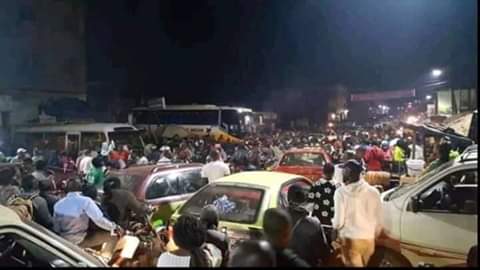 Heavy Traffic Jam As Passengers Scramble To Move Out Of Bamenda 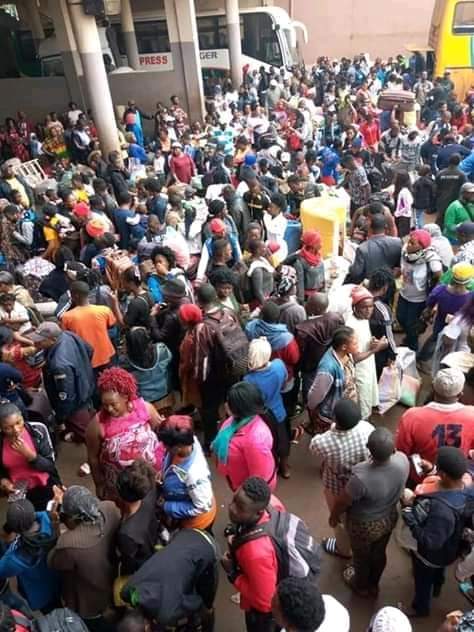