After National Day Of Mourning,Blood Continue To Flow

By Raymond Dingana
Two days after Cameroonians observed a Day of National Mourning for the seven students killed in Kumba, saturday october 24,2020, blood has not ceased to flow.
In the early hours of Monday November 2,2020, three persons were shot to death when Boh Etoma,a neighbourhood in Bali Nyonga came under attack from those eye witnesses say,were men in military uniforms.

"Three persons,all young boys including a local player of a musical instrument known in Bali as 'AnkLung' were killed.The young man was just coming from mbufung,a small farming locality in Bali only to meet his death.A corn mill operator only escaped by chance leaving his machines steaming while he dashed in to the bushes. Several persons were wounded and many motor bikes set ablazed.Some shops were also looted,"Ni Babila, not his real names,a retired Gendarmarie officer told DrayInfos. 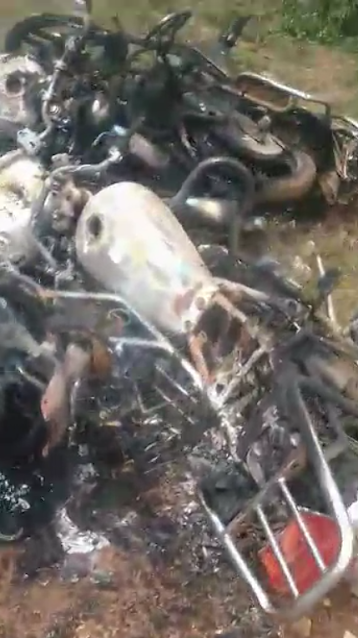 Bali is one of those villages in the North West Region of Cameroon badly hit by the ongoing Anglophone Crisis with an unprecedented amount of both human and material loses.
The recent killings came after women alongside their male counterparts hit the streets of Bamenda denouncing the killings in the two restive regions of the country especially the carnage at the Mother Francisca International Bilingual Academy in Fiango Kumba.
They also called for an end to the Anglophone Crisis which to them,will authomatically end the killings.
Talking to the media after the peacefull protest by the women,NW governor Adolph lele L'afrique said, soldires shot only when they come under attack all in a bid to protect them self calling it "self defence."
What we have not been able to confirm is whether the men in military uniforms were acting on self defence after coming under fire or not.
Labels: ANGLOPHONE CRISIS.