Funeral Of Kumba Students:Preacher Laments,Says Those Dying Are The Poor

During the funeral ceremony of the seven students killed when gun men attacked the Mother Francisca International Bilingual Academy in Kumba, Rev.Eka Martin from the Apostolic Church decried the killings saying those suffering are the poor while the rich despite knowing the answer to the crisis have refused to provide solutions.

"Those suffering in this crisis are the poor people.They are the ones who are in the bushes,it is the poor who are hidding under the rocks in the forest. It is the poor who cannot sell their farm produce any more in the market.The rich, they have all what it takes to go to Douala, Yaounde and Bafoussam and sponsor their children in schools but these children who are dead here today are children of poor people.Mr Prime Minister,Mayors,D.Os and Government ministers here present,again i say,the rich man knew the answer,he knew the solution but has refused to provide the solutions and when death came,it did not salut him and put him aside.Ladies and gentlemen,one day,a time shall come when we all shall be levelled by death and death knows no position,no title,whether you are rich of poor.If we refuse to accept the God whom i am preaching today,let us prepare to meet the Lord our God when he will judge the righteous from the unrighteous and separate the ship from the gaots,a day will come and that will happen," Rev.Eka told mourners.

Before the funeral proper,one a vehicle transporting one the victims of the attack caught fire said to have been caused by somuch heat.Many intervened and removed the casket bearing the body of the student.

Last week when Minister Atanga Nji Paul visited Kumba after the incident,he was openly interupted by a woman who told him she was bearer of a message from God.She said God told her to tell the minister that,the government should steep or face the wrath of God. 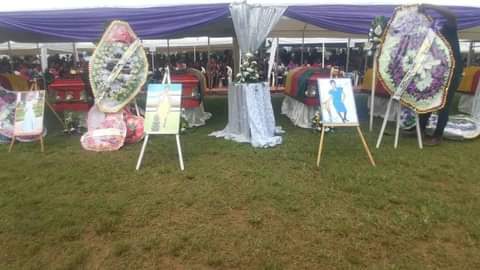 While the children are being laid to rest as at the time of this report, many are praying and hoping that,concret measures are taken to find long lasting solutions to the crisis so that,the lost of lives and properties is also brought to and end.