By Raymond Dingana
Separatist fighters in Bali Nyonga, one of the focal points in the ongoing war in the restive North West and South West Regions of Cameroon have placed on a ban on the activities of the Presbyterian Church in Bali.
They said, the ban will only be lifted after the resignation of PCC Moderator Rt. Rev. Fonki Samuel and the and Rev. Simon Voma.
Voma was shot along with other Christians, including a woman by name Ma Grace Numvi, who died from the bullet wounds.
Grace Numvi was interred in Bali on Saturday, September 4, 2021 by Christians and other sympathisers including those who trekked from far away places out of Bali. 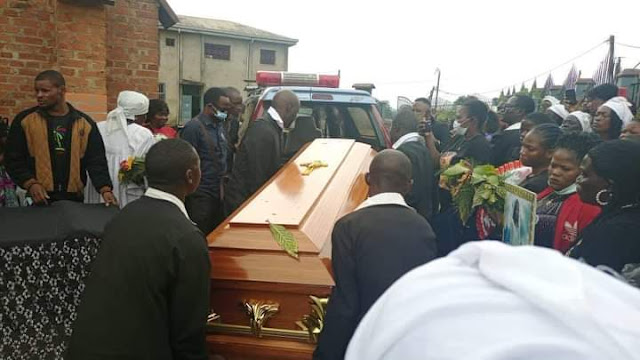 The relative calm Bali was enjoying may just be heading for the rocks after an audio clip said to be from armed groups in that part of the region emerged with the speaker banning the activities of the PCC for "lies telling".

"The PCC Moderator and Rev. Voma  Simon Montoh lied that they were not in the know of those behind the death of Ma Grace Numvi. Christians say they know those behind the shootings and that it was the Cameroon military.  Church elders have been killed, Sunday School children killed, Members of the Christian Women Fellowship killed, yet the church is not speaking the truth. We hereby ban all the activities of the PCC in Bali till the day the moderator and the parish pastor will resign,"  the voice said in the audio clip that has now gone viral.

The voice added that, the church is supposed to be the epitome of Justice and Truth in the society but has been proven otherwise by the leaders of the PCC.
Sunday morning, many PCC Christians attended church service in other denominations, an indication that they are respecting the ban.
It should be recalled that after bullets were rained on the PCC in Ntafoang Bali, the church reacted by saying.

"We therefore condemn in strongest terms this unnecessary and inhuman treatment meted on God’s children by those who are supposed to protect them," an except from the communiqué from the PCC read.

With this latest development and the fact that the Bamenda-Bali road has not been reopened, back to school in Bali might suffer a set back.
www.drayinfos.com
+237 676238865
Labels: ANGLOPHONE CRISIS.