For close to five years now, the populations of Bamenda III Municipality and the North West Region as a whole have been deprived of the opportunity to exhibit their know how in the area of Arts and Culture.

This has been blamed on the ongoing armed conflict romancing the region.

For five years now, lovers of culture have long for an opportunity to showcase their expertise in the domains Arts and Culture, an opportunity that has finally been accorded them by the Mayor of the  Bamenda III Council, Fonguh Cletus Tanue.

During a press conference that took place at the Council premise, Mayor Fungoh announced that, registrations have been opened for promoters of Arts and Culture be they groups or Individuals to register for free and be part of the maiden edition of the Bamenda III Festival of Heritage Arts and Culture FEHACU.

"Registration will be open to everyone resident in the municipality with any form of arts or cultural who wish to showcase anything in relation to our food, music, dance, craft attire etc.We are inviting friends of the Municipality as well as announcers to join us in giving prizes to our best participants as well as support underprevilleged persons including persons with disabilities, internally displaced persons who constitute an important part of our work," the mayor said.

The first ever edition of FEHACU to run from the 26-28 of November 2021 will be organized with the theme:   "Reconnecting to our roots, reviving cultural values and enhancing peaceful co-existence for socio-economic empowerment of Bamenda III municipality."

Quizzed on what measure the council has put in place to ensure that the same level of insurity that has stood on the way of the Cultures of the people from being promoted, the mayor said the best security is the people,

"It it is a people oriented festival and the population will take care of their security because the festival is for the benefit of all in the Bamenda III Municipality. The best security is the population."

Bahka Derick is head of the Communication and Marketing team of FEHACU. He pointed out what his team has been up to,

"We started already with the brand campaign which is phace one of our communication plan which is to make the people understand that there is something called FEHACU. The brand campaign went far from simple greetings in the morning and evening, wishing you well and telling people about the small history of Nkwen and Ndzah which are simple things the people did not know among others." 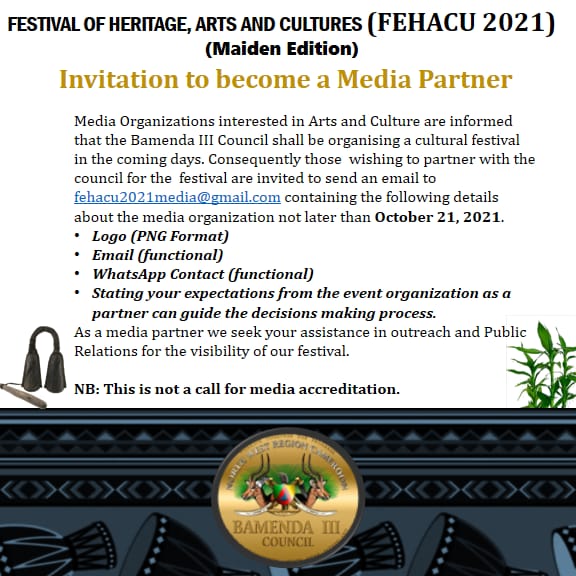 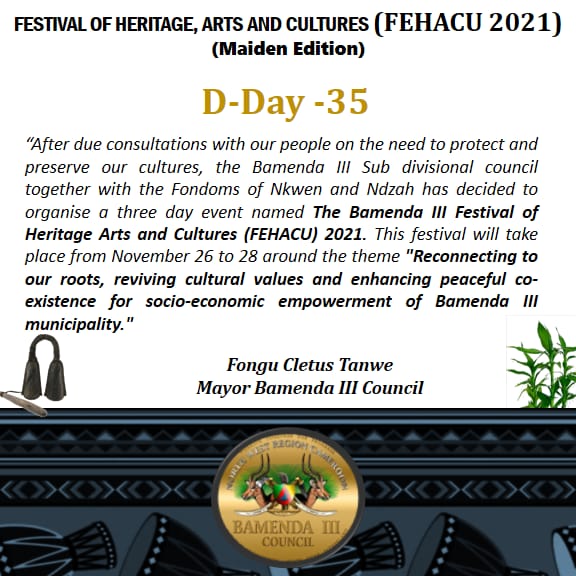 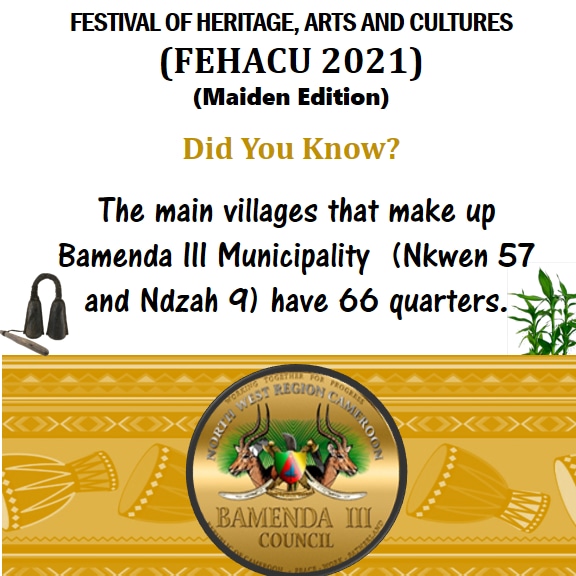 Bahka added that, many media organs have expressed their wish to partner with the festival.

"The media organs are those that by vertue of their creation have a passion and interest for culture and we are convinced that they are going to help us a lot in this journey," he said.

Denizens of Bamenda III are now looking forward to a successful festival of Heritage Arts and Culture come November 26-28,2021.