By Raymond Dingana
The Apex of son to mother's love has been exhibited in Nkwen Bamenda, North West Region of Cameroon by Ambe Macmillian Awa, Sunday July 31,2022.
In an event meant to house-warm his newly constructed bungalow, little did anyone suspect the keys of this house were to be handed to his beloved mother.
A sophisticated 3 bedroom modern self-contained apartment now belongs to Mami Azah Victorine, Ambe Macmillian's mother.
As emotional as the moment proved, in few words, Ambe makes the August announcement telling the guests that there are some "duties" that can never be repaid.
At this juncture, eyes were wide opened, hearts beating and the surprise look on every face was revealing of the unprecedented jesture. Yes, no one was willing  to wait another second before the less than 10 seconds  speech came to an end.
When he finally landed with the words saying the property was actually his mother's, Mami Azah's behavior was like she was under the influence of a tornado as she  dangled to find stability.

Yes! She was dreaming, her countenance changed and teers ran down her cheeks, triggering a similar reaction from all invited. Tears of joy was accompanied by beautiful gospel songs in typical Christian fashion.
It took time for mama Azah to regain herself and utter words of gratitude to her son, "thank you, thank you, and thank you" she struggled to find her words.

To the one she described as her husband, the one who changed her story by making her a Land Lady was all she managed to say as her tears of happiness continued unending.
One person who could not hide her emotions is Juliette Afunwi, a lady Ambe also refered to as mother thanks to the time he spent with her as a Journalist at Afrique Nouvelle Radio in Bamenda.
She too had been crying and says when a son recognizes the efforts of the woman who toiled all her life to see him succeed by offering her a roof over her head, it makes her cry.

Ambe's gesture to his mum has surely inspired many. Lohshie Eugene one of the invitees could not hide his observations. He,  just like many others say they are inspired by Ambe's show of undiluted love to his mother and hope to do same when and if posterity permits.

The house was dedicated to God by Rev. Asenek Cynthia who invocked the spirit of God to be the first occupant of the newly constructed house. 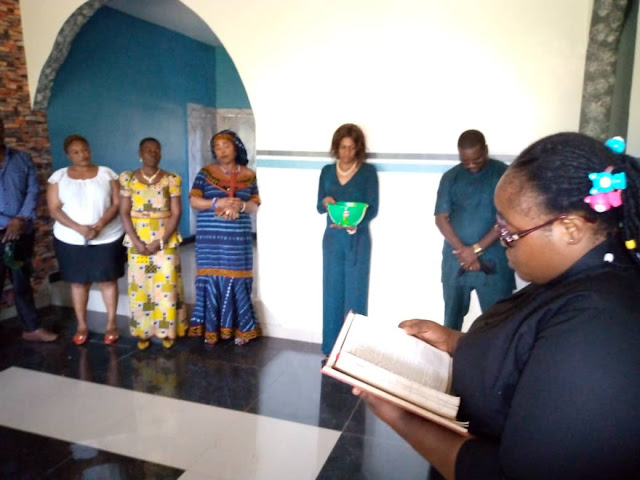 Anonymous said…
Signs of love, care & gratitude worth coping. We need to show love to our parents, family members and friends while they're still alive can feel, touch and enjoy not to throw parties or buy expensive cloth to them when they are gone.
It is not all about the money we have but the life's we impact with e little we have May God Continue to bless Ambe Macmillan ,his family and friends Amen Ayamah Elvis
August 1, 2022 at 1:44 PM