Two locally made exlosive device have gone off at the Azere New Church neighborhood in Bamenda.

The sound was so loud that it was heard from far away Nkwen.

We are yet to get information as to whether any one was wounded or not.

This month of January has recorded more than seven explosions already.

An electrician whose name we got as Clinton is battling for his life in a hospital after he was bitten by a snake on an electricity pole, Monday.

Reports say the snake may have come from a pear tree closed to the pole Clinton was working on.

Remains Of Slain Youths Paraded In The Streets Of Bamenda 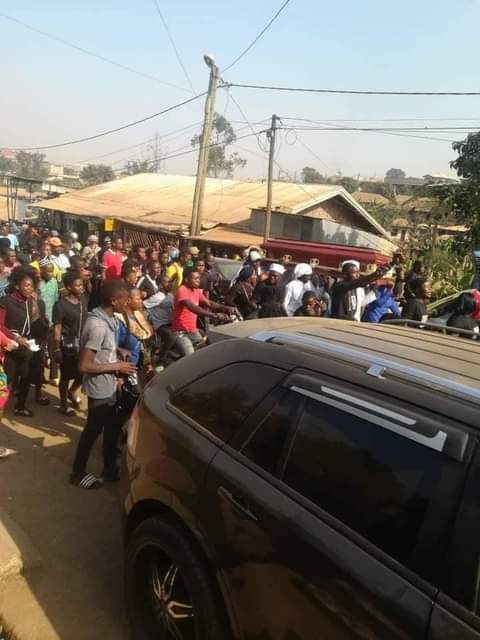 The remains of some of the boys killed at the Meta quarter neighborhood in Bamenda have been taken to the streets by loved ones.

The remains were removed from the Bamenda Regional Hospital Mortuary,Tuesday and Wednesday respectively by loved ones. After Parading the streets,the remains were taking for burial.

Taps have gone dry in many localities in Mezam,North West Region of Cameroon. Inhabitants of some neighborhoods in Nkwen and Bambili say,their taps have remained dry for months now.

The education family in Bambili is going through a lot of challenges caused by the water crisis. Many students say,at times they go to school without bathing. Some said, their relatives fetch water in town and send to them.

The case of Bambili has been blamed on the ongoing road construction that have destroyed pipes supplying water to the population.

In Nkwen,it is not clear what has caused the population to go without water for a long time now.

Those in Bambili are Nkwen are hoping that,the councils will come to their rescue.

It is same with the other areas hit by the  water crisis.

An ex convict recently got the father well beaten in Nkwen. He said the father did not visit him when he was behind bars.

He had spent years in prison for raping a 12-year-old girl.

His junior brother some days back poured  water on the old man when they had a misunderstanding.

Neighbours have blamed the mother to the children for being behind what the old man is going through.

The problem centres around the Nkwen development fee which stands at 250.000FCFA. To these persons;it is just a way to discourage people especially non indegens of Nkwen from owning structures there. One of them told DrayInfos that;an injunction  was planted on his construction site because he had not paid the 250.000FCFA development fee.

The queen mothers organised the come together Sunday to mourn four young boys killed at Meta quarters in Bamenda last Saturday by those with military uniforms.

This is not the first time they are coming out to mourn and condemn the wave of killings ongoing in the NW/SW Regions of the country.

Their latest outing came days after they were lambasted by many in Bamenda for coming out only when the killings are linked to separatist fighters but not when they are link to the Cameroon military.

Ghost town operations have continued despite sealing up of shops by some officials of Mezam.

Recently, shops were sealed in Nkwen to fight the phenominon but it has continued.

Business operators say, they are observing the ghost town operations not because they like to but because of insecurity.

They have however called on the authorities to do what is right and they will opened their shops without them being told to and they too will not need security forces to go about their daily functions.

The Bamenda City Council has anounced that, the road construction work earmarked by the World Bank within the city of Bamenda will soon start. The council also called on those whose buildings and other structures were marked for demolision and the owners compensated to do well to clear the way for work to commence. The city council says compensation had already happpened and that,there will be no compensation again. This has not gone down well with those who say they were not aware compensations were being paid. The city council did not say when work will actually take off.

Ndu Traders To signed Undertakens Before Shops Are Reopened

Their shops were sealed for respecting ghost town operations.

In a document that circulated online,the shops were to be sealed on the 21 of January 2021 and only reopened after traders must have signed an understaken never to respect ghost town and lock down operations again.