By Raymond Dingana
As early as 6:Am, the whole town was covered with security officials armed to the teeth.
This generated many questions from the general public who wanted to know what was happening in town.
This was a clear indication that the visit of the official Mascot for the African Cup of Nations (AFCON) 2021 was not well communicated.
'Mola' as the Mascot is christened finally arrived Bamenda and after a brief display at the esplanade of the North West Governor's office, it descended down town.

In what was supposed to be an event with sports groups, football lovers among others answering present, it was more of a military event than a civilian one.
Tens of military vehicles including amored cars accompanied the convoy transporting the mascot that had a bullet proof vest.
One could count the number of civilian vehicles transportating North West officials.
Some of the vehicles had military officials on board.

From Up Station, the convoy drove through Finanace Junction, Mobile Nkwen, Cow Street, Ngeng's Junction, Veterinary Junction, Sonac Street, City Chemist, Commercial Avenue, Old Town and back to Up Station.
At the governor's junction at up station, some few students of Government Bilingual High School Mendankwe could been seen greeting 'Mola' as someone struggled to share the flag of Cameroon to them.
'Mola' greeted the population but was reciprocated with a lukewarm attitude and not the fair play tradition expected to be promoted  in football bonanzas. 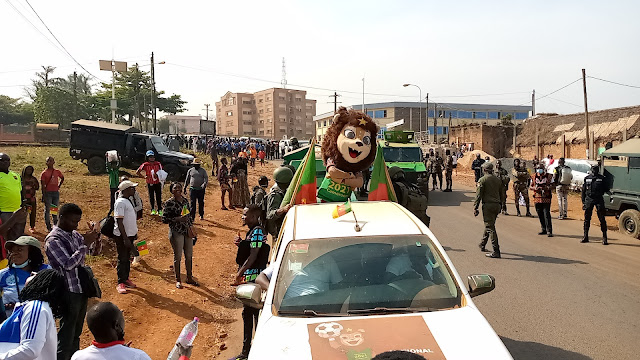 Many watched but their behaviors were indicative of the fact that they were unaware of what was happening.
The heavy military presence was rather a minus as guns were pointed at the population making them not to feel at ease, to the authoritis it was a security measure.
However, the population did not see it that way, they could not understand why guns should be everywhere in such a magnitude.
Few persons were able to wave back with the majority just watching.
As the convoy stepped on the dilapidated road, the mascot could no longer wave onlookers with both hands.
He needed to hold firm to the vehicle while greeting the population with one hand and this was the situation till the convoy landed at City Chemist Round About.
At all the junctions, no one could move when 'Mola' was passing.
The case at Commercial Avenue was not different, it was as if the population was not interested in the whole show.
At Old Town he was saluted by pupils of Government Practicing School Old Town Bamenda who were shouting at the top of their voices.
At the Regional Pastoral Show and Trade Fair that was organized at the esplanade of the office of the Senior Divisional Officer for Mezam, the famers too were surprised to see 'Mola', many did not even know what was happening.
The official Mascot for AFCON 2021 was received by the Secretary General at the North West Governor's office by Viang Mekala.

"We are very happy to welcome the mascot. We were surprised to hear that it was coming to Bamenda because matches will not be played here. We thank the head of state for making it possible for our country to host the AFCON," Mekala said.

"we are anxiously waiting for the Indomitable Lions to return to Bamenda with the trophy. Tell the players that the blessings of the people of Bamenda go with them," Achombong indicted.

It was a rare opportunity for the population of Bamenda to live at least an activity of the football jamboree coming up in January 2022 though it was void of the ambiance many expected.
www.drayinfos.com
Labels: SPORT