By Raymond Dingana
The Mayor of the Bamenda II Council Peter Chenwi has assisted bike riders in his municipality with 150 bags of rice ahead of end of year festivities.
He has also promised to pay for the production of identification documents for them.
This he said will help mitigate the rate at which commercial bike riders suffer harassments in the hands of uniform officers as they struggle to put food on the table.
This was after bike riders filed in a number of complaints at the council about their being harassed by security forces because they don't have the National Identity Card, lisenses, Insurance documents among others. 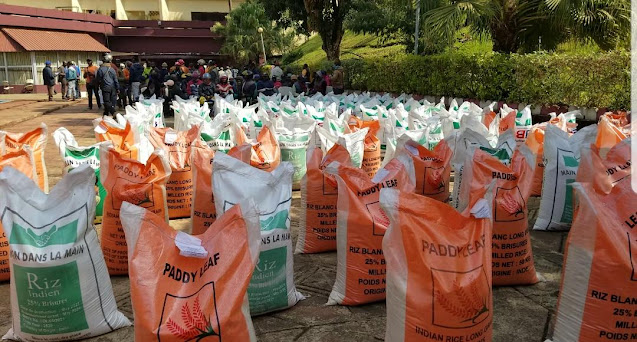 This was Friday December 10, 2021 at a come together with the bikers at a renowned hotel in Bamenda.

Complaints from the Bamenda II Bike Riders' Union indicate that many bikes have been seized by security forces. I realized that they don't have documents reason why I decided to come in which I know is a peace building process. I have instructed the President of the Union to bring a list of those that are facing these difficulties so that work can start immediately, Mayor Chenwi said.

Talking to the multitutes of bike riders, Mayor Chenwi said the gesture was to appreciate the riders for their responsibility in handling issues.

We saw how you marched to the Bishop's house and the governor's office when our daughter was shot and killed. There were no troubles and this was a sign of responsibility. He added.

The Mayor did not forget those who lost their bikes, identification documents among others during the burnings at Mbengwi road on Wednesday December 8,2021.

It is a sorrowful situation and we will see how to assist them. They should come with their complaints alongside the documents of their bikes.

For those who might have lost those documents to the wild flames, the mayor said something will still be done to assist them because they are only struggling to survive.

On his part, the President of the Bikers' Union, Mayenin Ndi appreciated the Mayor for the geature.
He also stated some of the challenges their sector is facing,

We don't have documents like riders' license, birth certificate, identity cards and others. Having these documents will help us circulate freely so that we don't keep running away from security checkpoints, he explained. He furthered

He also promised to support the bikers education their children. For those planning to get married, signing will be done free of charge, Mayor Chenwi promised.
Come February 2021, a tombola to win motor bikes will be announced for commercial bike riders in Bamenda II to win new bikes.
www.drayinfos.com
Labels: COMMUNITY DEVELOPMENT