The Sun Has Risen In Chomba, Fon Asanji Is Back

Not even the burning heat from the sun could disperse the sons and daughters of Chomba, a village in Bamemda II Sun Division of the North West Region of Cameroon who came out in their thousands to receive the one they called their new king.
To them, his coming was indicative of the fact that the sun has risen in the land and it was time to celebrate.
Before the new Fon came out, the Traditional Security of the village known as 'Lali' answered present at the event ground to purify the place and take care of ill intentioned minds for the security of the population.
The crowd started swelling around the main entrance in to the palace when the other traditional leaders from different villages were being ushered to the ceremonial ground which was the esplanade of the Fon's Palace.
With beautiful traditional rhythms animating the atmosphere spiced with songs of Praises, acceptance and love from the people both the young and the old, Fon Asanji II, 19 years of age is ushered in to the esplanade.
Mobile phones and gadgets of different brands in their hundreds could be seen taking photos of the new king.

The protocol officers were over powered, there was just nothing they could do to manage and control the multitudes who only went back to warm their seats almost an hour after the new Fon had settled on his throne.
Many could still be seen sneaking out from their seats to go take pictures of Fon Asanji II who sat there smiling and very satisfied to see his subjects open their arms to his reign as their new leader.

After invoking the spirit of God to take control of the event, traditional dances one after the other took the stage and their beautiful dance steps caused bank notes to rain on them from the population.
The Makongi dance from Bali Nyonga,Samba dance group of Mbatu,  Mfumbeng dance group, Mandere, Royal dance among others constituted some of the reasons why many did not want the event to end so soon. 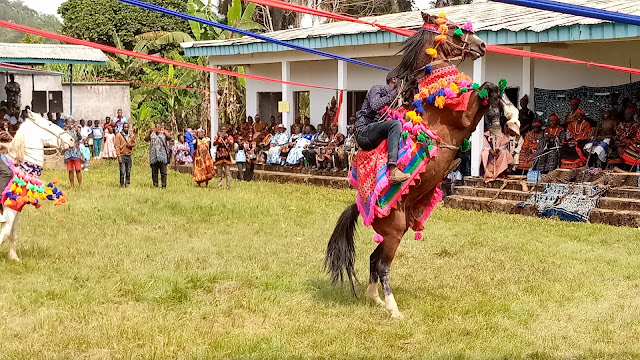 The President of the Chomba Cultural and Development Association(CHODECA) Tangie Samson Aunuh Atanga used the event to call on persons of good will to pray for the new Fon so his reign can be that of Love, Peace and Prosperity.

On his part, the head of the Chomba village traditional council,Ta Tita Takwi sounded this note of warning,

" any person,any chomba man who thinks he will come around and give a negative advice to our Fon will face the wrath of God. We don't want those people whom.when we enthroned the Fon, they go advising him negatively."

He also promised that they will help the Fon grow in his reign as the new leader of Chomba.

One thing the those at the event ground said they missed was the part of gun firing which to them could have spiced the enthronement ceremony the more.

With the current war in the North West Region, gun firing in events like that have forbidden.
Calm and serenity reigned  through out the event, no gun wielding uniform officers and separatist fighters.
It was a traditional event and the belligerents understood that perfectly well. 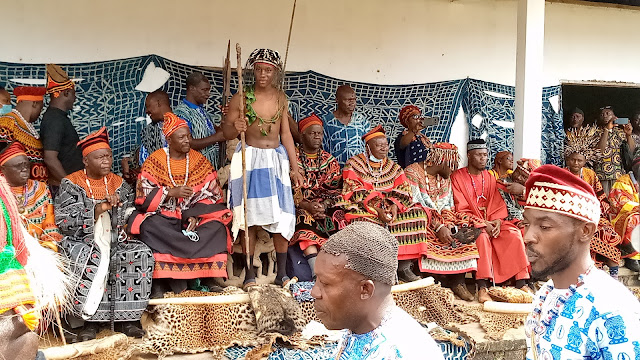 Worthy of not is the fact that Fon Asnaji II is a year one student of the National  Higher Polytechnic Institute NAHPI of the University of Bamenda UBa. He is reading Computer Engineering.
He replaces his father, H.R.M Fon Fobuzie Martin Asnaji II who journeyed to the world beyond in October 2021.

He managed the affairs of the people of Chomba for about 55years.
www drayinfos.com
Labels: CULTURE AND DEVELOPMENT