Inside North West Region: Latest News from The Region, Season 13

Government forces in the North West Region of Cameroon say they have scored big against suspected separatist fighters in the region. More than 10 were killed over the weekend, a source in the military said backing it with images he said are from Baribo. Two were neutralized in Bambui in the early hours of Sunday July 31,2022. Thanks to a placard placed behind their corpses at the Bambui four corners in Tubah Sub Division where they were dumped, we could get their names as Gen. Rasta and Col. John. It was the same fate about ten others suffered in Ewai village Batibo. They were killed and about ten weapons and a good number of ammunitions recovered. We also gathered that the  fighters were killed in seriouse battles when government forces launched an offensive on one of their camps in that part of the region. We have not been able to confirm reports from the non state armed groups that a good number of government forces were neutralized by separatist fighters during the battles.

Commercial bike riders in Bamenda have challenged Mayor Paul Achobong of the Bamenda City Council to make the roads in the quarters passable so that they can continue with their activities without pain. This is coming after the restriction on their activities was tightened with many bikes seized. They have been asked not to be seen on the major roads of Bamenda and only circulate in the quarters where the riders say the  roads are not the best. In order for them to operate well, they are challenging the city mayor to rehabilitate roads in the quarters.

The District Medical Officer for Fundong Health District, Dr. Evelyne Lem is inviting the population of Fundong and the entire Boyo Division to step up efforts to guard against the corona virus pandemic. She says the virus has re-emerged in the health district. She was speaking to www.drayinfos.com recently in Fundong. She says those who have not been vaccinated should make sure that is done in order to guard against the virus saying more than 20 new cases have been reported in the past few weeks. She adds that the other barrier measures like the washing of hands, wearing of face masks among others should be taken seriously.

The newly installed Divisional officer (D.O) for Bamenda III sub division, Ayuni Austine Sakah says he will collaborate with the population to re-activate peace back in to the sub division. He was speaking recently as he took over the baton of command from his predecessor, Bassileken Georges Magloire Emmanuel in a ritual performed by the Senior Divisional Officer of Mezam, Simon Emile Moor. Mr. Ayuni born in Muluf, Bui Division said after his installation that peace building is a collective effort. He was also coached to give a bloody nose to all forms of insecurity including kidnapping for ransom, killings, terrorism among others in his area of jurisdiction. He was also invited to ensure that civil servants are effectively present at work, just to name but these. Bamenda III for some time has been enjoying relative calm and there are hopes that the new D.O will make things better. 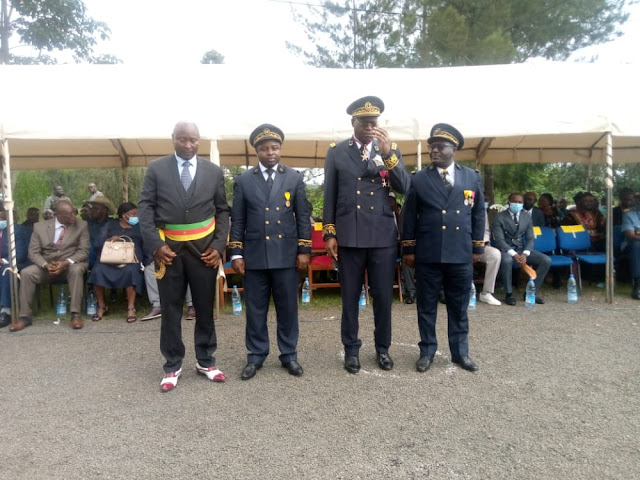 Reports from Wum, Menchum Division, North West Region of Cameroon say relative calm now rains in that part of the country. The relative peace the division was enjoying hit the rocks when four Fulani boys were killed by armed men some days back whose identities have not been revealed since no one has claimed responsibility. Accusing  Region fingers Westhave afterbeen pointing towards if the direction of separatist fighters while other sources say it was a result of an age old inter-communal tension between the Fulanis and native Aghem community. Two other persons were killed taking the  number to six death. About ten were injured as tension escalated. We are also gathering that some of the suspects behind the trouble in Wum have been arrested and will soon be charged to court.

During the seventh session of the North West Regional Assembly that wrapped up last Friday July 29, 2022, Rev. Father Michael Mua said the best way to rebuild peace in the crisis hit North West and South West Regions of Cameroon is by identifying the root causes of why people are fighting. He said people don’t just get up and start fighting. He also invited the population to have trust in their religious authorities because they are out to preach peace.  Strengthening democracy, improving the Justice System among others are some of the areas where Rev. Father Mua said efforts to build peace should be concentrated.

Mimi said…
This is interesting to read several articles in a click and get information on what was making news within the week. Good writeups and keep up.
August 3, 2022 at 1:21 AM