Inside North West Region: Latest News from The Region, Season 14

A suspected member of a gang that has been terrorizing inhabitants of Bamenda III in Nkwen and beyond has been beaten to death at Mbelem, a neighborhood in that sub division, North West Region of Cameroon. Reports say they were three in number when the population stormed their hideout when they were in a deep slumber. The door was forced opened and the three boys pulled out. One managed to escape while two were not that fortunate. One could not withstand the severe pain he got from the pounding and had to give up the ghost. The other was rescued by security forces while one managed to break away from the mob. Latest reports say the unresponsive body of the young man that was lying around fire wood junction at mile 6 Nkwen has been retrieved by family members. Mobile phones, computers and other items were discovered in their keeping. It is not clear if they were in possession of any weapon[s] or not.

Gun men last Sunday vandalized a vehicle at a church premise in Mulang, Bamenda II Sub Division carrying the CEMAC number plate. We gathered that after entering the church and tried in vein to force the owner to own up, the armed men then decided to damage the car. The man who managed to escape alerted uniform officers by phone. We are told he was charged FCFA one hundred thousand for his car to be brought back to him. That was done and the damaged vehicle was evacuated from the church premise after heavy gun shots were heard. It is not clear if it was a confrontation between the opposing sides of not.

Three persons are in a critical state in a health facility in Bamenda after their bikes collided head-on at the Ndamukong Street neighborhood in Bamenda, Monday August 8, 2022. Blood could be seen oozing from different part of their bodies as they were being rushed to a hospital. This is coming after many have died on that same road just of recent. A 16-year-old boy is said to have died about a forth night after his motorbike collided with another. He reportedly passed away in a health institution.

Gasoline pumps have continued to run dry in Bamenda as persons and vehicles are seen cued up at the lone filling station that can still boost of having the liquid gold though not enough to fill up the empty petrol tanks of vehicles in the town.  Tuesday August 8, 2022, the filling station at Veterinary Junction in Bamenda was crowded by many carrying containers to get fuel. Automobiles too were cued up waiting for their turn to fill up their reservoirs. We gathered that gasoline has been limited in supply and this has been the situation for close to a month now. 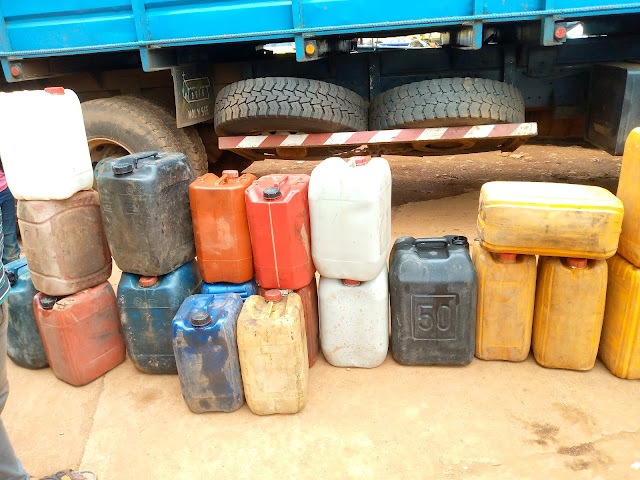 Newshour237 has reported that Students of the Department of Communication and Development Studies (CADS) of the University of Bamenda (UBa) have expressed their satisfaction after undergoing a one month internship program at the Cameroon Baptist Convention Radio, CBC Radio. During the Attestation Award ceremony organized by the station manager of CBC Radio, Emmanuel Bah Tokoh at the Immaculate Conception Arena at Up Station, Bamenda I Sub Division recently, the students say the one month they spent there was enriching. The students said they had the opportunity to present news briefs, major programs, announcements and were also schooled on news production, gathering, recording, delivery and presentation. They were also exposed to the spirit of being objective, unbiased, truthful, fair, and never accept bribe, among others. Professor Cheo Victor, the Director of Academic Affairs at the University of Bamenda and a lecturer at the Department of Communication and Development Studies invited the students to have role models if they want to excel. He said they must not be exactly like them and that having a role model would trigger that spirit of hard work in them. On his part, Dr. Tanwie Talon Gilbert AKA Dr. T who is also a lecturer at UBa could not hide his joy after seeing his students complete their one month internship period. He thanked the entire staff and management of CBC Radio for the time they spent with the interns blending theory with practice in order to achieve big.

The night of Friday August 5 2022 was a sad one for the inhabitants of Nkwen, Bamenda III sub division, North West Region of Cameroon following the shooting to death of two women by armed men. One of the Victims we got the name as Fondoh Anna was the owner of a popular supper market known as Jana Supper Market at Foncha Junction in Nkwen. She was shot around her residence and her belongings including her car taken away. As if that wasn't enough, the armed men resurfaced at Farmers House in Mile 3 where another woman was reportedly killed under unclear circumstances. A vehicle was also shattered and abandoned by the road side while some persons were whisked off at mile 4 still in Nkwen. Bullets were also rained on a taxi wounding manu onboard.

Three young men who could not be identified at the time of this report were found dead in the early hours of Friday August 5 at the mile six neighborhood in Mankon. Sources on the ground indicated to us that the victims were suspected to have been brought there by men in military attires and killed. Inhabitants only got up to the gruesome discoveries Friday morning.

Menchum Senior Divisional Officer Bans Use of Harmful Objects like Spears, knives, others

The senior Divisional Officer for Menchum, Abdoullahi Aliou has in a Prefectorial Oder placed a ban on what he says is the usual carrying and movement with cutlasses, knives, sticks, spears and any other object subjected to attacking fellow human beings. The Order signed on the  03 of August 2022  is aimed at preventing any further bloodshed between native Aghem population  and the Fulani community following the death of  six persons, four Fulanis and two Aghem in the month of July. Many were also wounded in the voilence that threatenned the relative peace Menchum has been enjoying. Only recognised vigilante groups whom the Order says should be seen carrying them only in their quarters and when on duty, people of advanced age are also allowed to move with their walking sticks since the sticks aid them in movement. Farmers and Graziers who will only need some of the objects to work in their farms and take care of their cattle are also allowed to carry their knives and cutlasses. Heavy sanctions await anyone who goes against the Prefectural Oder. Calls have also been made for anyone keeping such objects to turn them in. 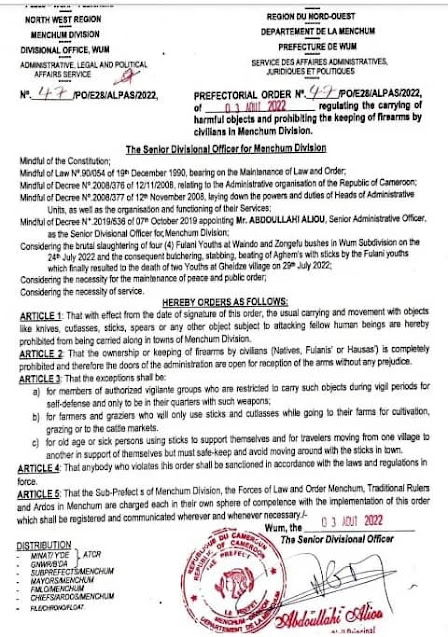 Divisional Officer of Nkambe Shuts Down Market Because Of Terrorism

Traders who before the 4th of August 2022 used to sell their goods at the NGIE Market in Njap village in Nkambe Sub Division will have to look for a new place to market their goods after the said market was closed by authorities. The Divisional Officer for Nkambe Sub Division, Ngidah Lawrence in a Sub-Prefectorial Order signed on the 4th of August 2022 closed down the Njap market saying it was a rallying ground for terrorists. The document indicated that the said market in recent years has become a rallying ground for terrorists from where they plan and carry out heinous crimes against persons and properties including among others, kidnappings, murders and cattle rustling. Nkambe for some time now has been portrayed by many as a safe haven as far as the Anglophone crisis is concerned. 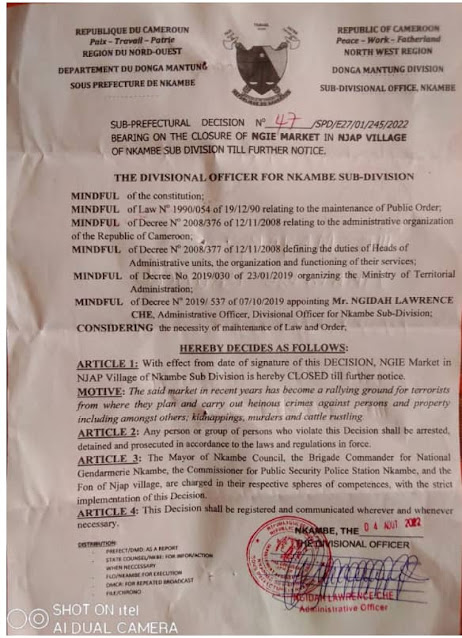