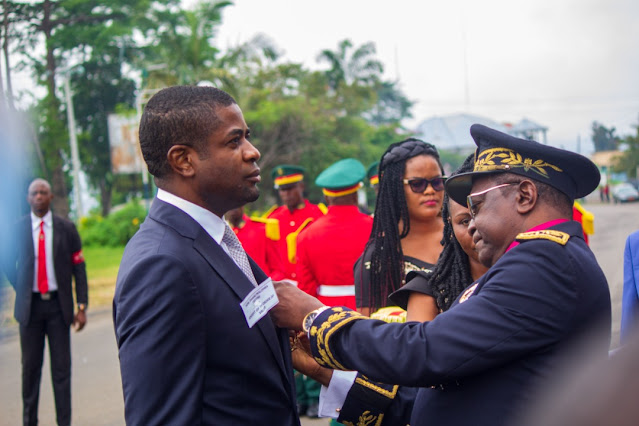 By Raymond Dingana The member of Paliament MP for Buea Urban Contituency, Malomba Esembe has been awarded the Knight of the Cameroon Order of Valour by Southwest Governor Okalia Bilai. This was during activities to celebrate the Golden Jubilee of the Unitary State on Friday May 20,2022 at the Buea Independence Square. Malomba Esembe who is now a Nknight is a Magistrate on secondment to the National Assembly where he is serving as the MP for the Buea Urban Constituency since March 2020 (following the Legislative Elections of 9 February 2022). Southwest Governor, Okalia Bilai Decorating Hon. Malomba The past 20 years of his life, the 36-year-old MP out of 36 have been devoted to his highest passion - public service. After volunteering from 2002-2003, he passed the entrance into Cycle B of ENAM (Court Registry Section) in 2003. He completed in 2005 and was posted to the High Court in Kribi as a Court Registrar. In 2006, he was among the first set of civil servants who were appointed to th
Post a Comment
Read more 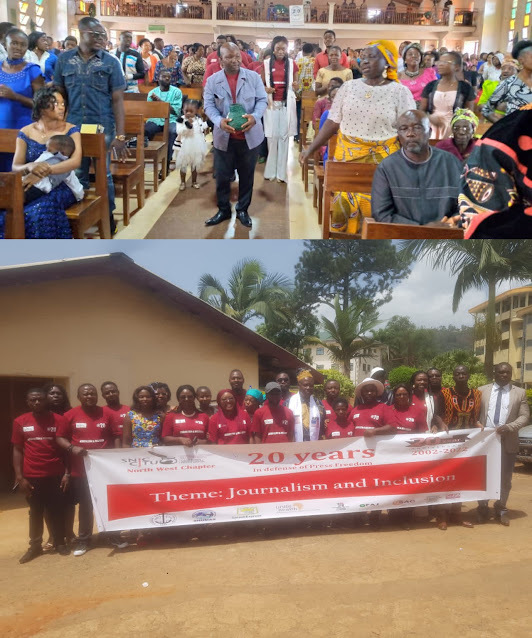 By Dingana Raymond Members of the Cameroon Journalists Trade Union, (CJTU) Northwest Chapter have in a Thanksgiving Service celebrated and thanked God for keeping them alive despite the ongoing armed conflict rocking the two restive regions of the country. This was during the 20th anniversary of CJTU on Sunday May 15,2022, the same day the trade union was formed two decades ago. CJTU Members Dancing With Thanksgiving To God's Altar Led By Chapter President, Nji Ignatius During the thanksgiving service at the Nkwen Baptist Church in Bamenda, Sunday May 15, the president of the body charged with the protection of Journalists, Comrade Nji Ignatius told christians that, We work under very difficult conditions in the Northwest region. We are thanking God for the fact that no Journalist has died as a result of the crisis reason why we are here in thanksgiving to God Almighty. While dishing out God's words to the christians, Rev. Njini Edward in his message titled Flee from Counterfei
2 comments
Read more 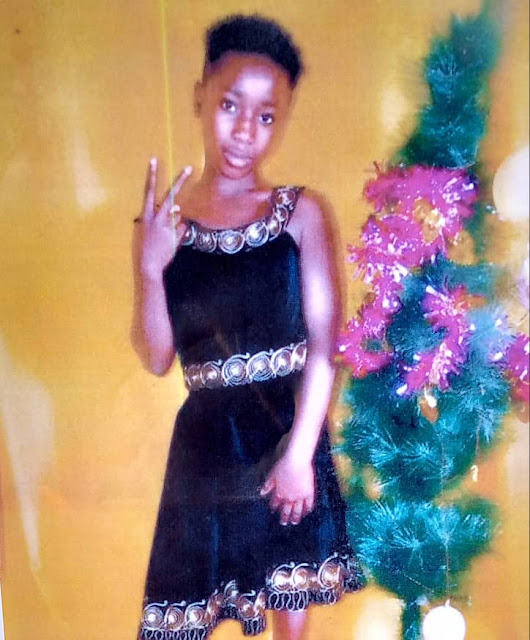 By Raymond Dingana Maiva where are you, Maiva where are you were some of the words that could be heard from the friends and class mates of the 12-year-old girl killed in the accident at New Road in Bamenda as they cried their hearts out. Not even the bike riders, neighbors and passersby who were at the scene could hold back the tears that filled their eyes. This was when Maiva Jaju's body in a couffin with the colors of the grassfield arrive mile Ndamukong in Bamenda. We brought her here because she was one of those helping her mother in their grilled fish business. I saw her few days ago, little did I know this day was never going to meet her, Ndifor Emile said as he wept , which kind badluck this, which kind badluck this? he lamented as he is escorted to a chair. Sadness filled the air as many watched in disbelief as Maiva's remains were driven away to be interred in her native Ndu, Donga Mantung Division, Northwest Region of Cameoon. Maiva, Victim Of Friday's Fatal Road
3 comments
Read more 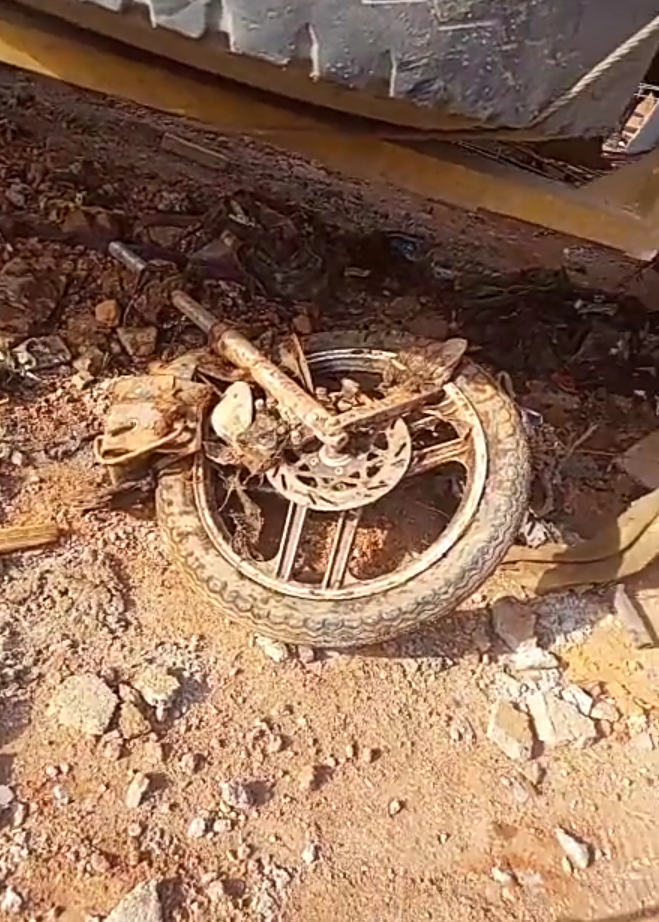 By Raymond Dingana Shock and consternation are still the order of the day at the mile 2 neighborhood in Nkwen Bamenda, Northwest Region of Cameoon following an accident that has claimed three lives leaving others in a critical state in what many say is a Bloody Friday A truck entering the town of Bamenda through the Newroad neighborhood suffered a technical issue and crushed three persons on a motor bike leaving their corpses in a bad shape, Friday May 13,2022. One Of The Victims Of The Accident At New Road The occupants of the truck are in a critical condition in a health facility in Bamenda. The accident magnated a huge crowd that turned out to feed their eyes with hands on their jaws and tears flowing down their cheeks as they could not bear the loss of another soul. Truck That Was Involved In The Accident At New Road The respect for human lives even at death is yet to depart from the population who could be seen moving around gathering body parts of the victms. This is the worst ac
4 comments
Read more

By Raymond Dingana Fuchi Albert Sam, a native of Kom in the Northwest Region of Cameroon was the lone provider for his family.  He would toil during the day and night, in the rain and under the sun just to make sure the many mouths that depend on him never go hungry, that the sick is treated and the naked clothed. On his way home from his job side, little did he know death was right there waiting for him.  While driving towards the Travellers neighborhood in Bamenda, one of the boiling areas in the current war ravaging the Northwest and Southwest regions of Cameroon Saturday evening, he was stopped by gun men who discharged bullets on him leaving him unresponsive even to the wailing of loved ones.  Who will take care of these children, who will be there for them when no one is there, who would they call Papa again , anyone with a hand in this will never know rest. As they love to see others suffer, may that also be their portion, cries an old woman as Fuchi's dead body lies in his
7 comments
Read more

Buried Baby Incident: How It All Happened 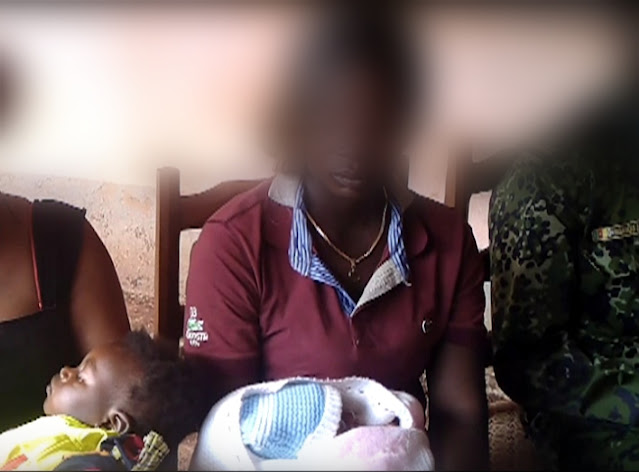 By Chansiline Nanze On the 10th of April 2022 , images of this young lady who supposedly delivered and buried her baby in Banekane - Bangangte in the Nde division of the west region went viral on social media. The traditional media followed suite. Despite being a trending story no one bothered to ask few questions. Was there a baby? Yes Was there abandonment? Maybe What about a burial? None So what exactly happened? The Ordeal of Internally Displaced 26-year old Tefu Emmanuella began in 2018 in Loum - Mungo division of the Littoral region, when she was impregnated by a young man. Emmanuella Carry The Baby News Went Viral That She Buried Alive And Was Rescued hours After They both eloped to Banekane where she gave birth to their first child in September 2019. In December 2020, the second child came in. The Second baby was just seven months when Emmanuella took in again. Why will she keep the pregnancy for 8 months and a week just to abandon the baby? (not abandon per se. ) Emmanuela,
2 comments
Read more 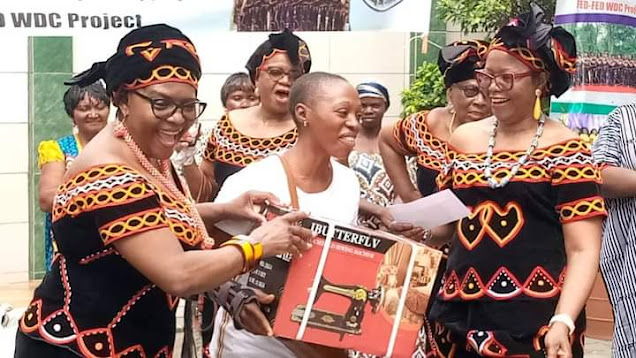 By Raymond Dingana A Non Governmental Organization known as Nkumu Fed Fed has taken her humanitarian activities to Internally Displaced Persons (IDPs) in Douala, Economic Capital Of Cameroon. An IDP Receiving A Brand New Sowing Machine To Empower Herself Economically From Nkumu Fed Fed This is part of activities of the 25th edition of it's Annual General Meeting, Friday April 22,2022 currently holding in Douala. During the event, 22 IDPs, Farmers, Restaurant owners, Seamstresses amongst others benefitted from the donation. More Items Donated To Volnurable Persons By Nkumu Fed Fed In Douala Items like sowing machines for the economic empowerment of female IDPs, food items and other non food items were amongt constituted what the volnurable women received. This was accompanied by a sum of One Hundred Thousand Francs to enable them start up some economic activities for themselves. Nkumu Fed Fed Members At The AGM Nkumu Fed Fed is also announcing that, day two of it's  Annual Gener
Post a Comment
Read more
More posts